The nucleus is a double membrane-bound protoplasmic organelles which contain the genetic information for control cellular metabolism and transmission to the next offspring.

The nucleus was first discovered in orchid root cells by Robert brown called it Areda.

The study of the nucleus is called as Karyology.

It is absent in RBC, Sieve tube of angiosperm.

It is commonly round but it is bilobed in eosinophil, trilobed in basophils and multilobed in neutrophils. It is kidney shaped in macrophages, horseshoe shaped in vorticella.

Phosphorus is present in RNA and DNA. 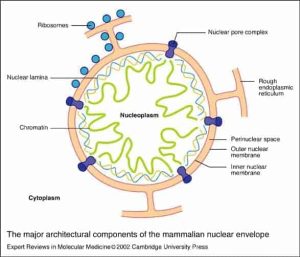 Added to wishlistRemoved from wishlist 17

Added to wishlistRemoved from wishlist 9

Added to wishlistRemoved from wishlist 3